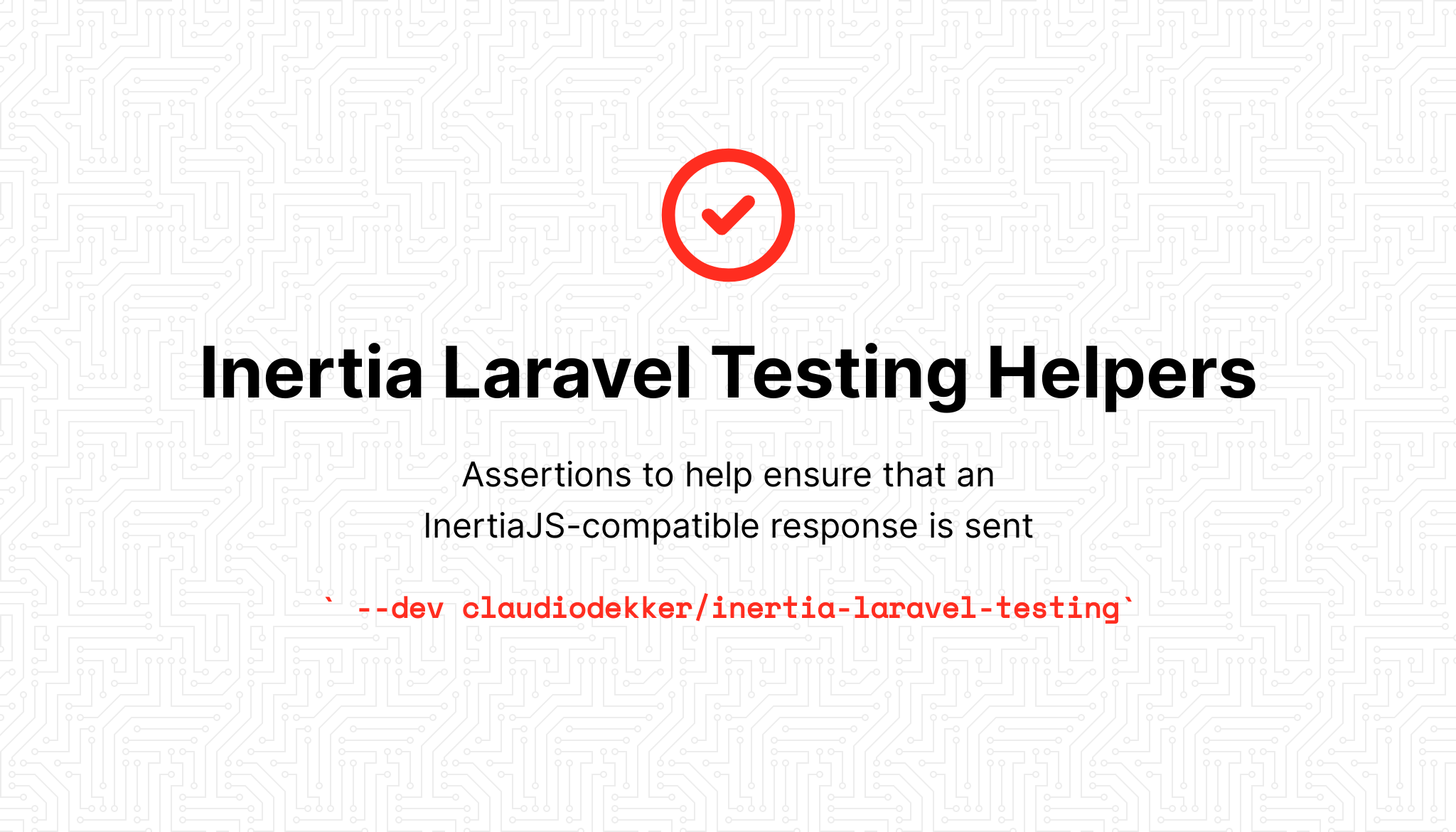 GREAT NEWS!: This package will be merged into inertiajs/inertia-laravel on March 1st, 2021, with upgrading efforts only taking a couple of seconds. Once this happens, this package WILL remain available for installation, but WILL NOT receive any further (security) updates going forward.

You can install the package via composer:

To start testing your Inertia pages, simply call the assertInertia method on your TestResponse responses, and chain any of the available assertions on its closure/callback argument:

When using this library to its fullest extent, your tests will end up looking similar to this:

NOTE: The above uses arrow functions, which are available as of PHP 7.4+. If you are using this library on an older version of PHP, you will unfortunately need to use a regular callback instead:

NOTE: While type-hinting the Assert isn't necessary (and will cause some minor search-and-replaceable breakage once migrating away from this package), it allows your IDE to automatically suggest the assertion methods that can be chained.

To assert that the Inertia page has the page component you expect, you can use the component assertion:

Apart from asserting that the component matches what you expect, this assertion will also automatically attempt to locate the page component on the filesystem, and will fail when it cannot be found.

NOTE: By default, lookup occurs relative to the resources/js/Pages folder, and will only accept matching files that have a .vue or .svelte extension. All of these settings are configurable in our configuration file.

If you are missing any default extensions (such as those for React), please let us know which ones should be supported by opening an issue!

Disabling or enabling a single lookup

To disable this filesystem lookup on a per-assertion basis, you may pass false as the second argument:

Alternatively, if you've disabled the automatic component filesystem lookup in the configuration file, it's possible to do the opposite and instead enable the lookup on a per-assertion basis by passing true as the second argument.

To assert that the Page URL matches what you expect, you may use the url assertion:

To assert that the (asset) version matches what you expect, you may use the version assertion:

NOTE: We recommend to only use this assertion when you are using asset versioning.

To assert that Inertia has a property, you may use the has method. You can think of has similar to PHP's isset:

To assert that Inertia has a certain amount of items, you may provide the expected size as the second argument:

In a previous version of this library, testing code could become fairly verbose, and the deeper your assertions went, the more complex your assertions became. For instance, here is a real example of some assertion logic we used to write:

Fortunately, we no longer have to do this. Instead, we can simply scope properties using the has method:

While this is already a significant improvement, that's not all: As you can see in the example above, you'll often run into situations where you'll want to check that a property has a certain length, and then tap into one of the entries to make sure that all the props there are as expected:

To simplify this, you can simply combine the two calls, providing the scope as the third argument:

To assert that an Inertia property has an expected value, you may use the where assertion:

Under the hood, this first calls the has method to ensure that the property exists, and then uses an assertion to make sure that the values match. This means that there is no need to manually call has and where on the same exact prop.

For convenience, the where method doesn't just assert using basic JSON values, but also has the ability to test directly against Eloquent Models, classes that implement the Arrayable or Responsable interfaces.

Finally, it's also possible to assert against a callback / closure. To do so, simply provide a callback as the value, and make sure that the response is true in order to make the assertion pass, or anything else to fail the assertion:

This library will automatically fail your test when you haven't interacted with at least one of the props in a scope. While this is generally useful, you might run into situations where you're working with unreliable data (such as from a feed), or with data that you really don't want interact with, in order to keep your test simple. For those situations, the etc method exists:

IMPORTANT: This automatic property check DOES NOT APPLY TO YOUR TOP-LEVEL PROPS. If you wish to enforce this for the top-level of your page as well, you may enable this in our configuration file.

NOTE: While etc reads fluently at the end of a query scope, placing it at the beginning or somewhere in the middle of your assertions does not change how it behaves: It will disable the automatic check that asserts that all properties in the current scope have been interacted with.

Because missing isn't necessary by default, it provides a great solution when using etc.

In short, it does the exact opposite of the has method, ensuring that the property does not exist:

To reduce the amount of where, has or missing calls, there are a couple of convenience methods that allow you to make these same assertions in a slightly less-verbose looking way. Do note that these methods do not make your assertions any faster, and really only exist to help you reduce your test's visual complexity.

Instead of making multiple has calls, you may use the hasAll assertion instead. Depending on how you provide arguments, this method will perform a series of slightly different but predictable assertion:

To reduce the amount of where calls, the whereAll method exists.

Since this method checks properties against values by design, there isn't a lot of flexibility like with some of these other methods, meaning that only the array-syntax exists for it right now:

Instead of making multiple missing call, you may use missingAll instead.

Similar to basic hasAll usage, this assertion accepts both a single array or a list of arguments, at which point it will assert that the given props do not exist:

While writing your tests, you might find yourself wanting to inspect some of the page's props using Laravel's dump or dd helpers. Luckily, this is really easy to do, and would work more or less how you'd expect it to:

To modify any settings such as the lookup paths, valid extensions etc., you may publish our configuration file into your application and change any of it's values. To do so, run the following Artisan command:

Please see CHANGELOG for more information what has changed recently.

If you discover any security related issues, please email claudio@ubient.net instead of using the issue tracker.